Following is our experience which had been shared to become aware of guidance from the existence that is always here with all of us.

We started from home to day morning at around 8.20 am for a shoot in one of the leading television channel. I thought on the way to drop in to our centre at Malleswaram to collect few books to gift. Our car moved to our centre and after a few minutes my life partner who was accompanying me went to our centre and came back faster with few books. From there we left to the place as we had only the address of the destination and we thought to reach the nearest place and find out the exact location. On the way our car moved from Malleswaram to west of cord road while traveling we were asking for information to reach Pappireddy palaya and we took left towards the bridge above to take right towards Magadi road, traffic was cool as the metro construction is going on still was time there for the traffic to catch up. We were guided in the WOC road by an auto person from the place where we enquired to take right turn on the 3rd signal. We started moving as was bit free we crossed two traffic signals and finally had to wait in the third signal. As on the way I browsed around to find concrete blocks been kept below the over head metro. My mind all of a sudden started generating a thought as if what might happen if the overhead bridge falls on the car and mind with fraction of second started popping with few more thoughts. I was conscious and was aware to read these thoughts arising within me which was very much not common for me until there is a kind of information from the universal consciousness. Though my rational judgmental mind discarded it but my inner awareness just made sure in reformatting and projecting to the universe in a kind of necessary change and protection appropriately with guidance from the existence. We then took right and were travelling towards Nagarbhavi road where on the way we just stopped to have something, as I became aware that we still have much time to arrive at early. This kind of thought was unusual as many are aware that I don’t have breakfast and we had a bit and Anuradha enquired for the address with the hotelier as he was not aware I enquired with auto guy there. He asked us to reverse back and take right after travelling a little back from where we came, we did the same. As we were driving we once again checked for address a little further with a person on scooter (Just note asking for address which we never do so often- we will discuss by end). Then we took left and once again right as he directed and we moved up the road where we joined nagarbhavi road from there we went as directed. As we reached the road near pappi reddy pallaia I was aware of before we started as we have to travel on this road which was a direct but all these many rights and left was bit making me aware. We took right and was traveling were we once again asked for the address as someone said we have to go reverse and we took reverse and was moving not so long as we just crossed a four way there was no signal and something made me to drive left though the path was very much clear, at the same time I heard a scream at the back ground and I turned my head back to saw people screaming just then we heard a bang on the rear of our car while I saw a big truck fully loaded with sand was moving right away and travel with great speed which was raising ahead and on the median as the truck climbed across and racing further I was seeing the truck was sliding towards the left about to fall. That moment as I was going through the moment my mind automatically was entering into a deep state where everything slowed down and my mind of saying the truck will become steady and halt without any injury to anyone. Just within few moments slowly a little ahead the truck crashed on the lamp post on the median along with plants and stopped finally with median in between wheels of right and left side. We too stopped a little further. Everyone were just rushing towards our vehicle looking us safe as I opened the door with complete wellness in mind and heart I heard them saying “it is a miracle” “just escaped from death”, ”Divine is with us” etc. After seeing around soon went to see Anuradha, she was still coming out of shock. Tear’s rolling out from her eyes. Gave some water and just did a reframing using language with a theta visualization of removing the energy of the experience so that the memory carries the experience and not the disturbing energy attached. The traffic police who was coming back stopped the bike and took over the situation asked me to collect a letter for claiming the insurance. As we found the time was running, I took my camera and clicked few snaps which been posted here. We then as a normal traveler went and had the shoot done and returned back home feeling completely safe and guided of this MIRACULOUS experience. It is our REBIRTH today. 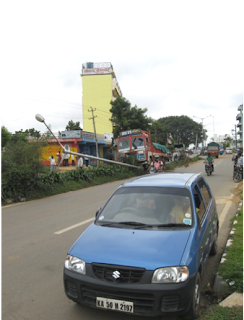 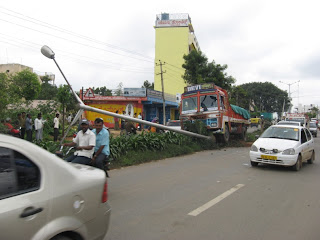 Important awareness of message from within to note:

The time though been decided for the mishap to take place, when one is with self the self guides them in the way done in the experience making me to go to our centre, having breakfast, often asking for address, take different paths, etc all these are to shift the time which finally made the impact very much negligible.

The impact in the vehicle is a mark, seal of reaffirmation as well as confirmation of my direction and my purpose of life to share myself with all.

It is a miracle. Imagine the circumstances when everything was happening at the right time. The meeting was definitely possible. This guidance is purely form within downloaded from the existence in my journey within.

This is just not an experience as everyone said divine is with us. I want to say Divine is within and only meditation of total communion with self helped to become still were the state is zero within mind and myself commanding the situation in control.

Till the moment in this case was not shown what will happen but was in the moment to moment in the present. This momentary consciousness if from the knack of being with me from an order discovered within.

Mediation in THETA happens even with eyes open and today’s experience is an validation of its potential consciously.

Finally I am aware without even a speck of doubt in my mind that it is a REBIRTH for fulfilling my purpose of life.

MIRACLE is happening, only your awareness is needed to become aware of the guidance from within to believe it in your mind. Just believe is my option, I guess even you want to do, do it.

C.J.Jeyachander Spiritual Seeker, Spiritual Life Coach
Elected a Zone President for Zone 14, JCI India for the year 2015 gives me immense pleasure and responsibility in serving you and society at large. YUVA - Lead the Change is 2015 vision of Zone 14 Team. Invite you all to be part of change. I am a Facilitator, Coach, Modeller, Therapist, Healer and to say I work integratedly with Body, Mind and Spirit. Humans are multiprocessing system and that is why my area of work to name is many but every thing is towards Mind development to evolve and achieve a supreme consciousness with amazing health. I am well aware of importance of BELIEF'S of an individual and also their uniqueness. My specialization is NLP as a Master Trainer, Hypnotherapist and Trainer, Graphologist and Graphotherapist, Energy Healer. for me age is not the criteria but the MIND is .My purpose is to help others to understand themselves better and create a space to Identify their uniqueness and evolve.